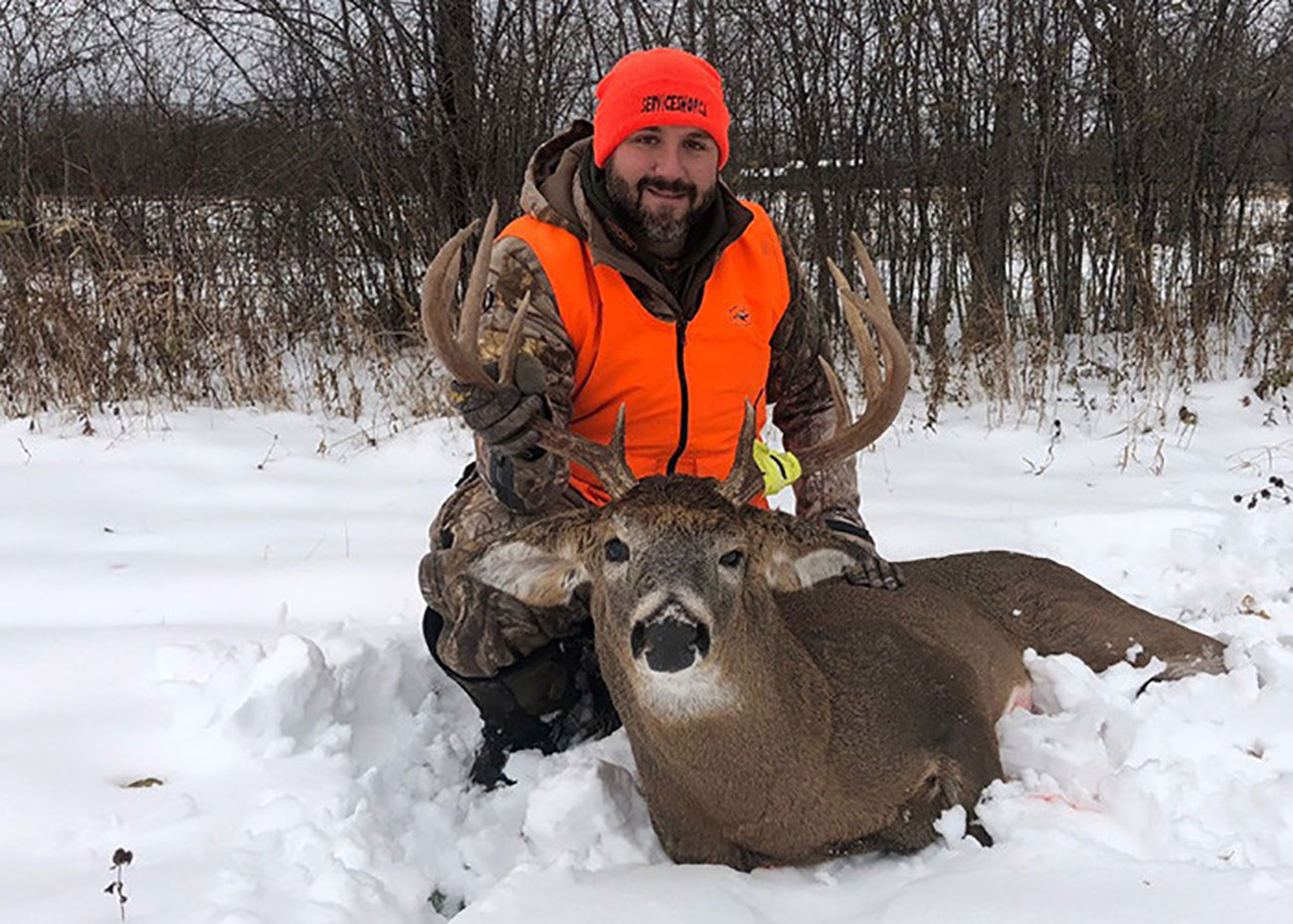 The following is a guest post from a viewer named Michael Cabrelle of Ontario, Canada. Michael’s story inspired me and I hope it does the same for you. Michael has written a few blogs for the site in the past. The following words are Michael’s.

I started watching Midwest Whitetail in the 2008, where I came across the videos on the Realtree website. It was something new, it was semi-live, I was hooked. I told my brother and friends about it and we were all watched it weekly, or back then, twice weekly.

I learned so much from Bill and the guys in the early years. I managed to shoot my first buck with a bow in 2010 using a lot of the advice and tips learned on the show. Trying to improve our chances for future success, my brother and I decided to try to improve the properties we hunted as much as we could so we decided to try a couple Poor Man’s Plots. The story to those could be found here.

With the improved properties, our deer sightings and encounters got better and better and in 2013 I was able to end the 5 year quest and close the chapter on my dream buck, “The Veteran”. You can read the story here.

In the years that followed, we had some encounters with great bucks and my brother was able to wrap his tag around a truly incredible buck. All of our success had come hunting the same property for close to 20 years. It was the place where my dad and uncle brought us out and taught us to hunt, where we all shot our first deer.

Unfortunately, that property was sold prior to the 2017 season and the new owners did not allow hunting as there was a big developer moving in. That was a tough pill to swallow. With no place to hunt last season, my uncle invited us to hunt his 100 acre farm. With limited time off work to hunt last year, I was fortunate enough to shoot a great big bodied 8 pointer during our late muzzleloader season. For having such a poor start to the year, it ended on a high note.

Last year, in early November, I remember seeing Jared Mills post on social media about having his dream of land ownership come true. I had always dreamed of owning land of my own someday, and have always kept an eye open in the classifieds and looked online.

In late December last year, a 93-acre parcel popped up on a local site. I immediately reached out and began talking to the owner. It seemed like a great property. The owner granted me permission to walk the property and it seemed like a great place to be able to hunt with family for years to come and eventually build a home.

Work and life got in the way, and I put the dream of owning my own hunting land on the back burner. I tried to get it out of my mind.

Soon spring turkey season came, and then bass season, but I always had that property in the back of my mind.

Over the summer, I reached out to the owner to see if it was still for sale. He said yes, but he was not actively listing it. Another few busy months of work and fishing on the weekends, fall was right around the corner, and again I couldn’t get that property out of my head.

I would drive out there and park, or tour the neighborhood. My brother would often ask “are you going to look at the trees again?” I would always answer “Yup”.

Fast forward to the weekend of Canadian Thanksgiving. I took another drive out to the property. When I got home, I told my girlfriend, “I’m going to e-mail the owner and make him an offer on the land.”

I went upstairs to my office, opened my email and there was an email from the property owner in my inbox. My heart sank. I figured it was sold. Instead, he was reaching out to see if I was still interested because he had intentions of listing it with an agent shortly. I responded quickly and after a short negotiation, we had a deal in place.

I was to take possession of the land just in time for our 2nd week of gun season. The owner was gracious enough to allow me access the weekend prior to owning it. I took a few walks on it to get familiar with the lay of the land and find some of the 12 stand locations he had left behind.

My dream came true and I took possession of the land on Tuesday November 13th. I took November 16th off work in hopes of harvesting a buck on my 36th Birthday.

We had a huge snowstorm that day so my plans to hunt that morning were delayed. Instead of hunting, I did a little bit of scouting, looked at the forecast and came up with a game plan for Saturday morning.

I was settled in nice and early. It was a beautiful morning, shortly after 7:30 I look to my left to see a big buck coming through the thick brush at 40 yards. He was coming right in front of me.

I shouldered my 20-gauge slug gun and when he stopped at 20 yards, I put it on his front shoulder and squeezed the trigger. He went down where he stood. I couldn’t believe it. It looked like a really solid buck.

I took a few minutes to collect my thoughts before climbing down to take a look at him. As I approached, I couldn’t believe it. It was the big 10 pointer that the previous owner had sent me trail camera pics of, that he had been chasing for 2 seasons.

After recovering the deer, I sent the texts and made the calls to family and friends. Then it started to sink in: I had just shot a great buck on my own land, my own dream had come true.

In closing, I just wanted to say thanks to Bill, Jared and all of the guys at Midwest Whitetail for providing great content and being an inspiration to a regular guy like me.